Bollywood, Tollywood are great inspiration in our Indian bridal, wedding costume and jewellery.

The epic movie are great inspiration of Reetifashions.com jewellery. Speaking about historical movies, not many of us may enjoy watching one unless the movie has created a buzz about its costumes, jewellery, sets, visual effects, etc.

One of the recent Historical fiction films released this year was the much-talked about film, ‘Bahubali’. The film has created a stir in the industry because of its breath-taking costumes, jewellery and of course the visual effects.

But did you know, that every piece of jewellery worn by the cast was handcrafted? Few pieces were also designed for multipurpose use. For example, a necklace worn by ‘Sivagami’ (the character played by Ramya Krishna) was designed in such a way that it could be used as a kamarbandh (waist band) too.

Reetifashions.com display great deal of Bollywood, tollywood jewellery.  Bahubali and Padmavati the epic movies have brought back us our old ancient design with a touch of modernism.

Bollywood jewellery Bahubali inspired elephant motif necklace set in pearl, is created with a beautiful touch of Reetifashions.com artisans.  The rose gold pearls and the tiny seed dangling pearls make the piece elegant and in vogue 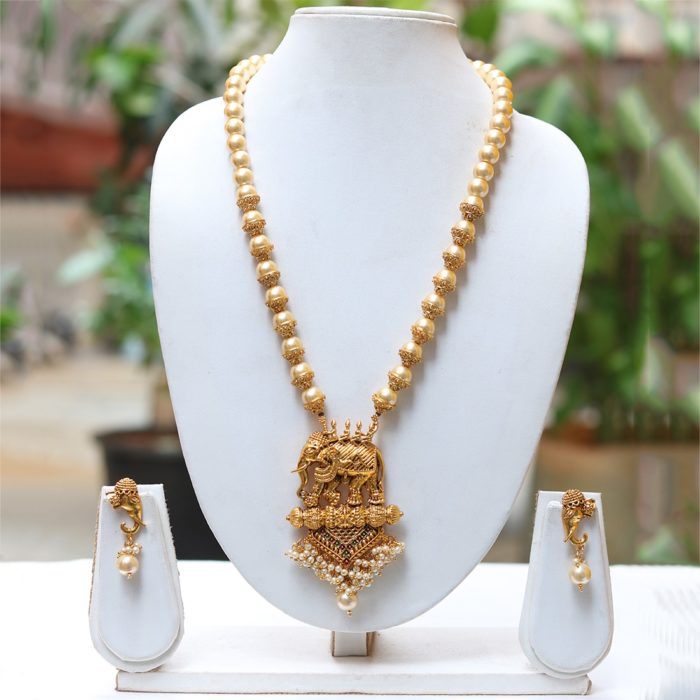 One of the lead character from the film Bahubali is Sivagami. The necklace, earrings, nose rings, bangles and maangtika donned by the character were beautifully handcrafted. Each piece had a matte gold finish, which gave it a royal look.

Hindi movie Padmavat again created a stir with its story, costume, location, jewellery and definitely amazing actors playing the role in the movie.

Deepika, looks like the archetypal Rajasthani queen adorned in stunningly intricate outfits and heritage jewellery. To achieve such looks took months of work from the specialist designers to recreate the beauty of the Rajputana era back to life.